When I think of all the challenges that I encountered in creating two albums for the Bicentenary of Bahá’u’lláh, I can only think of how grateful I am. Now that the journey is complete I can see how I was guided every step of the way.  I learned to listen to my intuition, to pray and rely on God and to have faith that the outcome would be victorious.  The process required patience, resilience, perseverance and the constant act of letting go and allowing God to take over.
I remember the moment I felt inspired to create an album for the Bicentenary of Bahá’u’lláh. We were on Pilgrimage as a family in December 2016.  On our last day we were walking towards the Shrine of The Báb.  I suddenly felt this strong urge that I must seize this opportunity to create an album in English (I had already been working on an album in Chinese for the Bicentenary). At the same time I thought it would be crazy to try to produce an album in just six months as it usually takes at least one or two years to compose, record and produce a quality album. But I knew I had to do it and so I prayed to find a way to make it possible. Through prayer and some creative brainstorming, I found a collection of songs that I had recorded previously but were not on any albums and decided to take on the task of composing a few new songs, including one about the Titles of Bahá’u’lláh in honor of the Bicentenary.

As it turned out, making the album was the most difficult project in my entire musical career. There were so many obstacles and challenges that I started making a list of them – and I counted 19 difficulties in total!  But in the end those challenges turned out to be blessings in disguise. The most striking example of this was that the sample disc we got back from the duplicator was unusable because of distortion. After trying to fix it twice (sending it back and forth to Shanghai where the duplicator was located), it was clear that we would have to find a different duplicator.  Amazingly, we were able to find a new duplicator in Beijing in a day. Only later we realized it would have been impossible to get the CDs done in time from the first duplicator because it was in Shanghai.  Being forced to find a new duplicator in Beijing ultimately made it possible to finish in time.  So what originally looked like a huge crisis turned out to be the greatest blessing.
Yet another challenge came right at the end of the process. After numerous delays we were finally set to receive the packaging the last week before we left for our summer holiday but as fate would have it one of the heaviest rain storms to hit Beijing in 25 years stopped all delivery of shipments for a couple of days just when our packaging was set to arrive. In addition the factory that produced the beautiful red and gold paper cut packaging hadn’t sealed them in plastic so we were afraid that they would arrive not only late but also water logged and completely unusable.
By the grace of God, however, they arrived just in time and completely dry and undamaged.  However, all of the delays meant that, while I had planned to spend two weeks shipping out orders, I had only two days to send them all out and ended up spending every final minute at the post office. I was half afraid my family would leave without me but I was able to send them out just in time to catch a taxi and go to the airport on our last day!
I often relied on this quote during the challenging days: 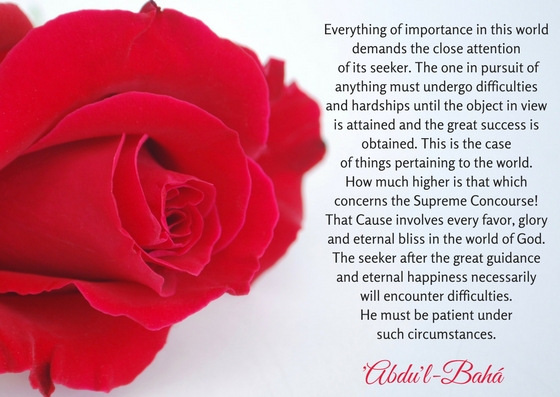 « A new video – Intimation Invincible – a song about bullying »

Magnified, O God be Thy Name, where the trees of the garden of Thy Revelation have been clad with verdure; A been made to yield the fruits of holiness during this springtime, when the sweet savors of Thy favors & blessings have been wafted over all things, and caused them to bring forth whatsoever have been preordained for those in the Kingdom of Thine irrevocable decree & the Heaven of Thine immutable purpose.

How true is that, and what an assurance for us when we fully experiencing that! Thank you for sharing from your divine confirmation in the light of the Words of Abdu’l-Baha that you lave dearly. I love them, too, and I wrote them down on my note book! Love so much, precious friend, Elika!!

Thank you dear Mioara! I’m glad the passage touched you as much as it did for me. We are so blessed to have the writings to guide us every step of the way. 🙂

This quote touched me very much. How true it is!Thank you for sharing your insights and talent so freely.
Much love
joy