Where There is Love

Now that Birds of Love is almost complete, I’m feeling so grateful for all the assistance I have had in finishing this project.  I would primarily like to thank Jarome, my producer, who so creatively worked on all the songs and tirelessly made sure this project was always on schedule.  It is because of his efforts that we have a new CD released just a year after ‘Fire and Gold’ was completed!  It has not been an easy task especially since Jarome and I live on opposite sides of the globe but we have committed to making it work so that we can communicate effectively and made our music a priority.
There is one song in particular that Jarome added his magic touch to.  I composed the song Where there is love last February and Jarome had the vision of adding percussion and other wonderful elements to it which made the song come alive.  It is my favorite song on the album as it’s full of energy.  It has 3 different quotes within it and a lovely Spanish guitar part performed by Jason Cohen.
You can hear it right now below!

‘Where There Is Love’ from the new Album ‘Birds Of Love’
This song is special for me not only because of the instrumentation, but because it is the first time I have released a song with lyrics that are not exclusively from the Baha’i Writings. The words of this song feature not only the words of Abdu’l-Baha, Son of Baha’u’llah, but also a poem by French author Henri Matisse and an Apache Wedding Blessing!
The launch date for the Birds of Love project in Beijing is January 23, 2009 but the package will be available beginning of February in other parts of the world. I will try and make it available electronically by the end of January.  I look forward to sharing all the songs with you and the new album very soon along with my new and greatly improved website at the end of this month! 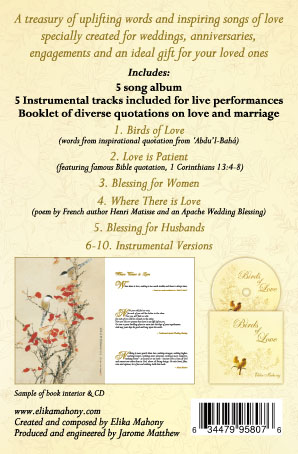 What a brilliant song!

Thanks Tarry and Sherrijoon. Glad you like the song. 🙂

This is very nice and uplifting song.

Dearest Elika,
I acknowledge your dedication to your music and like your enthusiasm and care about details that add beauty to your work. I’m happy that I’m going to be in that part of the world that the CD will be available beginning of Feb.

Thank you Erica, is a lovely gift for all of us
congratulations!!!

I love the song. I cannot wait for the whole album to be available! Keep up the great works of music that are uplifiting!

Thank you all for your encouraging words about the song. Look forward to sharing the whole album with you soon.

Lovely! Can’t wait to get a copy in Hong Kong! 🙂 Amazing song! 🙂

Just wanted to mention that there is now a video for this song featuring Elika herself!
Details are in Elika’s blog here:
http://www.elikamahony.com/2010/04/18/new-video-for-song-where-there-is-love
It’s also on youtube.