Last night I attended an incredible jazz concert in Chatham which was part of the Jazz Festival at Wequassett Resort and Golf Club. The band is called ‘The Dave Schnitter Quintet’. I seldom have the opportunity to see professional musicians perform in Beijing so this was a special treat! The band consisted of a jazz pianist, a double bass player, a jazz drummer and Dave Schnitter on the tenor sax. They were all such fantastic entertainers and were fully engaging their audience. What struck me most about the band was the drummer as he was so immersed in the music and played so many challenging rhythms. He was introduced as a rising star on the scene of jazz music, but in my opinion, he stole the show with his skills and his performance. His facial expressions were full of emotion when he was performing and one could tell that he was fully engaged in the music. It was definitely a night that won’t be forgotten! 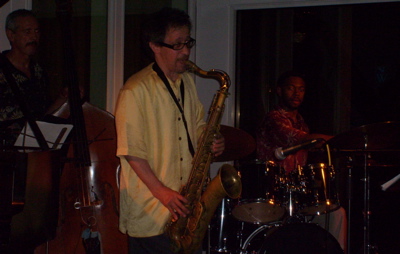 « The Process of Recording Voices For Peace »