Sweeten Their Souls – A duet

As the two year anniversary for the release of ‘Infinite Bounty’ approaches, I wanted to share some thoughts about one of the songs on the album, ‘Sweeten Their Souls’.  (The last blog post was about the song, ‘Lay Not On Any Soul’)
‘Sweeten Their Souls’ is one of the more upbeat and creative pieces on the album in terms of instrumentation and style.  When I first consulted my producer about how to arrange this song, he felt it needed an underlying rhythm that would bring the song alive.  When he suggested adding drums, I was a little hesitant at first but after some reflection, I was excited by the diversity it would bring to the album so I told him to go for it!
Once again I had the pleasure of working with talented musician, Ali Youssefi.  His voice truly beautifies the piece.  I love how our voices combine at 2:17 on the word ‘comforted’!  The most creative part of the song happens at the end when the phrase ‘Sweeten their souls’ echoes over and over again.  I was hoping the listener would take these words to heart as they reflect on the essence of what the quotation is about.
Something extraordinary happened while I recorded this piece… I sang it many times over the course of an hour or two and all of a sudden, as I immersed myself into the full meaning of the words and truly let go of the outcome, my voice took on a completely different tone during the recording.  My vocals took on a silky, smooth tone which I had not heard before.  I think it was as a result of allowing myself to become an instrument of inspiration to pass through.  It was truly magical!
I chose to set these powerful words to music because of all the prejudice that exists in the world today.  This quotation is truly a healing balm to those suffering from injustice.  When I think of the Bahá’ís in Iran and the religious prejudices they endure, I am in awe of how they put this very quote into practice by their love, forgiveness and steadfastness.
Before I recorded the song, I wrote another blog about composing the piece and shared a very rough demo of the piece.
‘Sweeten Their Souls’ is available on the album ‘Infinite Bounty’, a CD on the theme of detachment from the Baha’i writings.  You can listen to the song below… 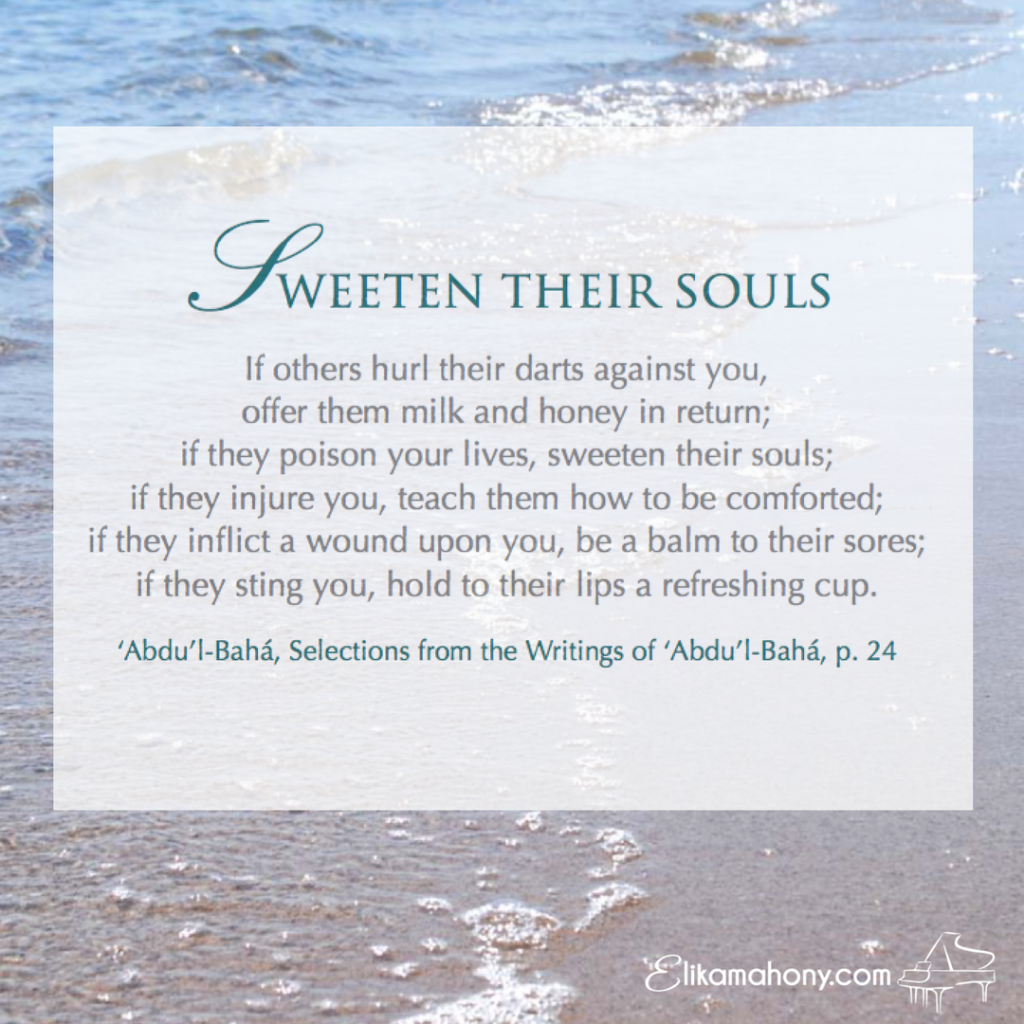 « Duet in English & Spanish Armed with the Power of Thy Name »

Thank you so much Odete. 🙂