A small miracle happened today. I was trying to record the piano and vocals for the last piece on my detachment album and it was just not coming together. I was having challenges with the ending as I hadn’t finished the composition when I recorded the demo several years ago and I also felt unsure whether I even wanted this piece on the album.  As it happened, I had guests arriving at that moment so I decided to come back to the song after visiting with them hoping it would become clearer in the interim.
As my friends and I were talking together about life and the challenges it often brings, one of them shared a prayer on the theme of detachment that he often recites in times of difficulty. As he was saying it, I felt a huge sense of joy and confirmation knowing at once that this was the quotation that I needed to add to the album instead of the one I was trying to work on earlier. After my guests left, I rushed to the piano to set the prayer to music and felt confirmed as the piece flowed so easily.  I usually rehearse the piano and the vocals several times before I record but I decided to record the piano part and just play what came to my heart without knowing how the words and the melody would come together; I just had faith it would all work out as it was meant to be.  When I sang the vocals I didn’t know exactly what melody to sing and just allowed it to flow from my heart.  I was amazed that the words I sang finished exactly where the song ended – that was a little miracle as I had not practiced it at all beforehand!  I finished recording the demo and sent it to my producer to see how he would arrange it.  He loved it just as it was and shared that he felt the song had already been written in the universe and that I had just plucked it for everyone to hear!
I love how life brings moments of confirmation especially when we are open and aware of the little gifts that come our way. If it weren’t for our guests today, I would probably still be stuck on the same song. I’m grateful for these moments of clarity and the small miracles that are shown to us when we are willing to be open and detached.
(Note: Since I wrote this blog several months ago, the album has been released.  Here is a link to the finished version of this song called ‘Detached from all save Thee’. 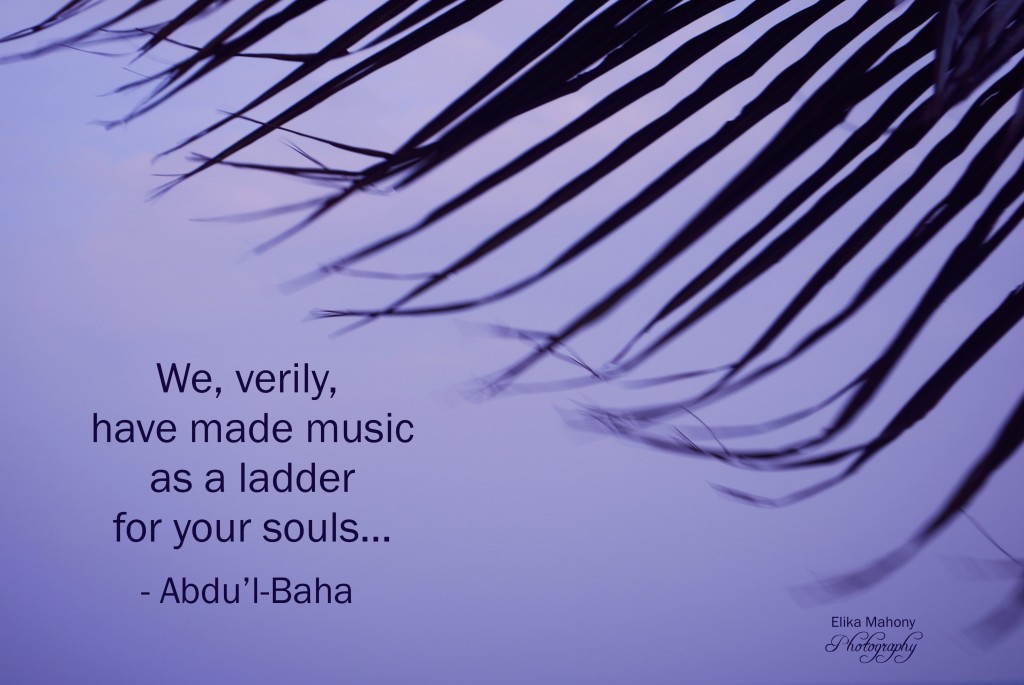 « Dedication for Mothers Day! Video for the Ascension of Baha'u'llah »

I just read this aloud to my sister-in-law whose new son-in-law is a pianist and composer–and she herself is intensely creative–and she loves your description of the creative process!

You are blessed. It seems you have a connection that set help at the right time. Can’t wait to hear it.

Hi Bret, so glad your sister-in-law enjoyed the description. Yesterday was such a gift seeing how the song unfolded creatively. Feeling very blessed.
Hi Kenneth – can’t wait to share the song with you…

I love it! What a beautiful blog! Thanks for sharing the miracles in your life…

What a lovely confirmation of Hus Divine assistance! Beautiful sharing of faith and being open of heart. ♡

Don’t why i cired， but i really did cried when i read this sentence：“I love how life brings moments of confirmation especially when we are open and aware of the little gifts that come our way.
Thank u！

What a beautiful story now I can’t wait to hear the song.

Thank you all for your sweet words. This is becoming my favorite piece as I know something larger was at play. I’m working on my last few songs and am so very excited to share them with you!

I’ve used that ladder many times, especially over the past few years of being so desperately ill. Music followed by prayer or vice-versa form my most powerful prescription. And what music do I listen to the most in that situation, particularly? Your music, whether it is your vocal or instrumental compositions. Your music is also a balm for the aching soul.

Hi, Elika!
Your experience is inspiring! I’m eager to hear the song.
Enoch

Thank you so much Glenn. I am moved to know that my music is helping you through your illness. It is a gift for me know that it has been a healing balm.
Thanks Enoch and Earl! Here is a link to the finished song: http://music.elikamahony.com/track/detached-from-all-save-thee