The making of Amame – a collaboration

I’ve had the pleasure of working with some incredible musicians lately – one of them is my friend and talented musician Ali Youssefi.   I met him last year in April when I was visiting the Baha’i World Centre in Israel. One night at one of the gatherings, I heard him sing and play the guitar and was moved by the songs he played and the spirit in which he sang them.  Soon after, we set up a meeting to discuss music and talked for a few hours, comparing notes and I felt completely at ease. I asked Ali if he would be interested in collaborating with me which I knew would not be easy as we would have to work long distance and record our parts separately. He graciously agreed and a year later, our song ‘Amame’ was created!
Initially we wanted to compose a song together but living in 2 different countries proved to be quite challenging so instead I composed a piece in Spanish and English specially for us so that we could sing in two languages (Ali was raised in Chile).  I don’t speak Spanish so Ali helped rephrase parts of the melody and where to fit the words so that the Spanish would flow with the English. We had envisioned that the piece would be played with a guitar (by Ali) and as the song progressed we decided to add sprinkles of piano (sprinkles turned into bigger sprinkles) and added one of my favorite instruments – the cello. Because the song has a bit of a Latin flavor we then decided to add some percussion and our talented friend Gustave Wayenece worked his magic with the percussion section.
There are few people I want to thank for making this song possible:
Glenn Loe who graciously allowed Ali to use his studio for recording his vocals parts and guitar,
Gustave Wayenece for spontaneously agreeing to record the percussion section,
Liu Man for her graceful cello performance,
Jarome Matthew for patiently putting all the different parts together, mixing and mastering, and helping the song reach its full potential,
And a huge thanks to Ali Youssefi who has been a gift to work with – always honest, supportive and genuine with his ideas and such a pleasure to work with.
Here are the lyrics for the song.  Have a listen and let me know what you think:
O Son of Being! Love Me, that I may love thee. If thou lovest Me not, My love can in no wise reach thee. Know this, O servant!
-Baha’u’llah, Arabic Hidden Words, #5.
To purchase Amame click here (the funds for this project will be donated to a charity that we have chosen called ‘The Baha’i Temple Fund’).
[audio:https://www.elikamahony.com/wp-content/uploads/Amame-Love-Me-That-I-May-Love-Thee-1.mp3] 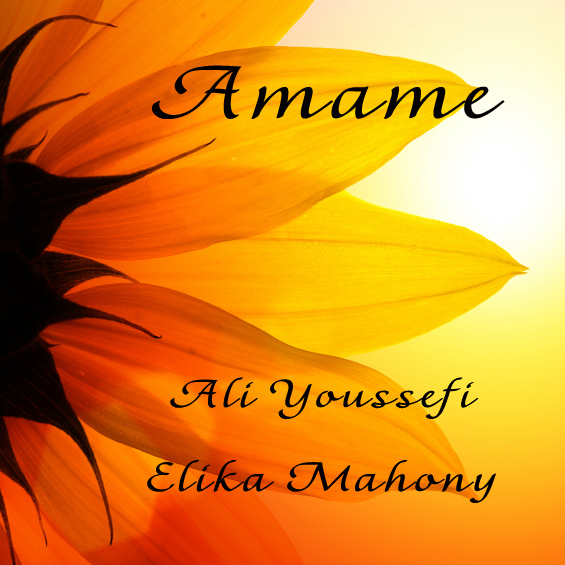 « 'The Photograph' – dedicated to the Centenary of Abdu'l-Baha's visit to America Childrens Song: Service is an Honor (free download) »

Thank you for sharing this story! Waiting for more beautiful songs! Big hugs

I’m so glad you’ve finally created something that really reflects who you are musically and what you love. It’s taken a long time, but being patient and not giving up has proven to be well worthwhile, given how excited and in love you are with this song!
Congratulations.

One word: mindboggling! Two more words: love it!
The guitar intro was awesome, and the piano sprinkles were like sugar icing on the already incredible music. And the spot where the cello entered the musical feast was PERFECT! It could NOT have been more perfect! 😀
Hugely inspiring! 😀

In a nutshell: CELESTIAL!

I love this! It amazingly relaxing and beautiful.
Thank you all!

Thank you all for your loving support and kind words! I feel blessed to have worked with Ali to create a song like this and look forward to creating more songs soon!

I just posted about it on Sulia 🙂