I had the privilege of attending the concert of two amazing divas – Cesaria Evora and Mayra Andrade.  What an outstanding evening!  The night started with a new artist, Mayra Andrade, who had such charm, elegance and grace and a wonderful connection with the audience.  At one point I was moved to tears just watching her in her element and listening to the gorgeous Cape Verdean rhythms!  She had composed some of the songs herself and enjoyed herself immensely on stage.  I couldn’t help but be drawn to her magnetic personality during the performance.
Cesaria Evora was the last performer of the night and walked on stage barefoot as she is usually accustomed to doing.  She is now 69 years old and still performing! Amazing to see such talent on stage.  The music was heavenly and at one point everyone was standing up dancing in front of their chairs (I was dancing in the aisle too)!  One couldn’t help but move when listening to the amazing bossa nova rhythms and drums.
At one point during the night, there was an interactive period with the audience and the MC was giving away a couple of autographed CDs from Cesaria Evora.  To win a CD, the audience had to answer what the birth date of Cesaria Evora is.  Ironically, just before the concert, I was telling my children about her and my daughter did a google search to find out more about her and excitedly shared that Cesaria’s birthday is close to my daughter’s birthday and told me the date!  Usually I don’t have a great memory for facts and figures but for some reason her birthday stuck in my head because it was close to my daughters birthday and I was trying to figure out how old she was on my way to the concert! So thanks to my wonderful children, I won an autographed CD tonight! 🙂
Big thanks go to Helen Rutstein and her lovely family as they invited me to the concert (you’re a darling Helen) :D.  It truly was a treat to be part of such a festive evening! 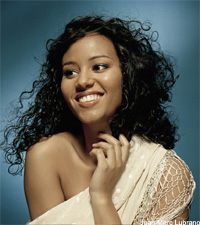 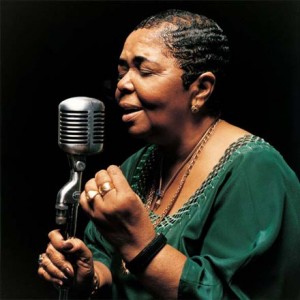 my precious one Elly love
How i have missed reading your blogs for the past months of my travels not having access to the net! So happy you got to go to this concert! I so love your latest Chinese album that i have been listening to recently as it just arrived in the mail.

Fantastic! Music is truly a spiritual delight! Thank you for sharing. 🙂

Thanks so much for sharing your experience that evening with us, Elika. Wow it must have been so magical. I love Cesaria Evora’s music and kind of presence, although I’ve never had the privelege of seeing her perform in person. I shall now make sure I listen to her music this week end..Lots of love to you and your family!

Dearest, just read your post. Sounds like a wonderful experience. And what an interesting coincidence! I am sure you are enjoying the CD !!! Much love

it was great, I enjoyed listening to them sing live more then from CD before 🙂

Thanks everyone. It was a lovely eve and I’m still feeling the magnetic effects when i think about it.
Sally – glad the blog inspired you to listen to some of Cesaria Evora’s music over the weekend. 🙂
Lovely to see you there Yuliya! You looked radiant!