The following is an article from an interview that I did last year with a Chinese magazine, Best Life called Passion For Art: Beyond National Boundaries .  The interview would have been translated to Chinese for the article, and then was translated by Betty Dai from Chinese into English again, meaning may be inaccurate with some things. 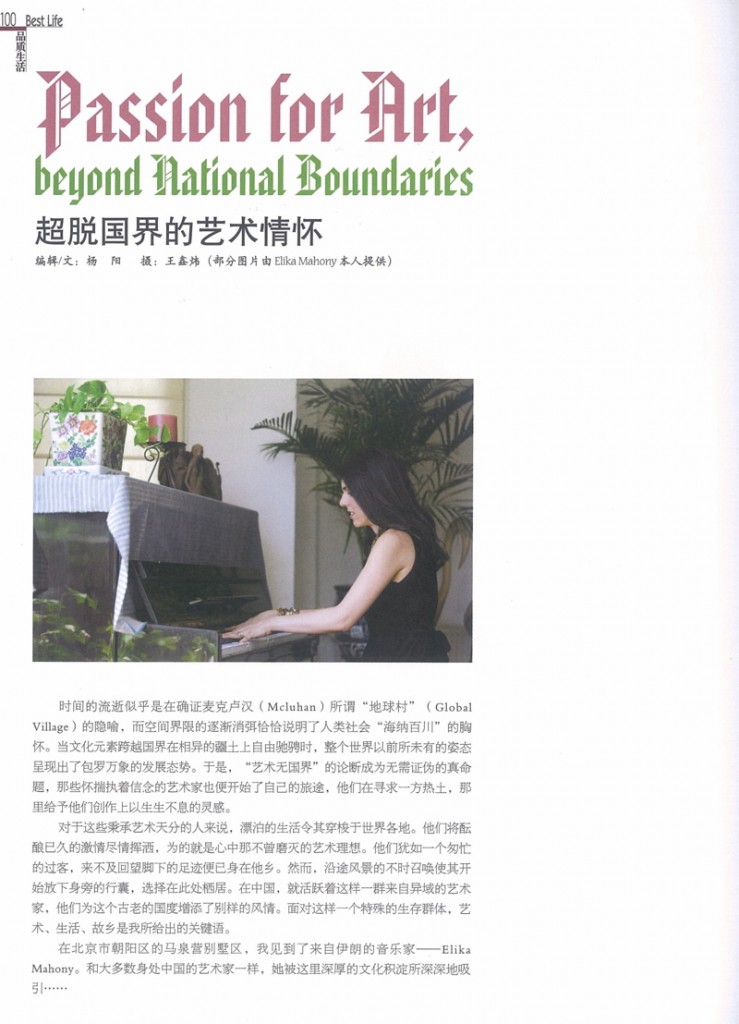 “Seems like that the metaphor of “Global Village” by McLuhan has been proven with the passing of time.  Moreover, the phasing out of local boundaries has illustrated this all-embracing concept. When this cultural understanding travels across countries, its spreading throughout free lands will enable the whole world to present an unprecedented all-embracing beauty. The ideas presented in Beyond National Boundaries are gradually becoming the mainstream. The artists with faith and passion then started their journey looking for a land where they can find their inspiration unceasingly.
These gifted artists, who travel and live all around the world pursuing their dreams, are just like passengers; they arrived in another city without even being aware of it.  The beautiful scenery keeps calling them to stay here – China – where a group of artists from different countries are very active, and their being here added a lot to this ancient country. The key words I would attribute to these people are as follows: art, life, and hometown.
I met musician Elika Mahony who is from Iran. She now lives in Ma Quan Ying, Chaoyang district, Beijing. Just like other artists who live in China, she is deeply attracted by the richness of the Chinese culture… 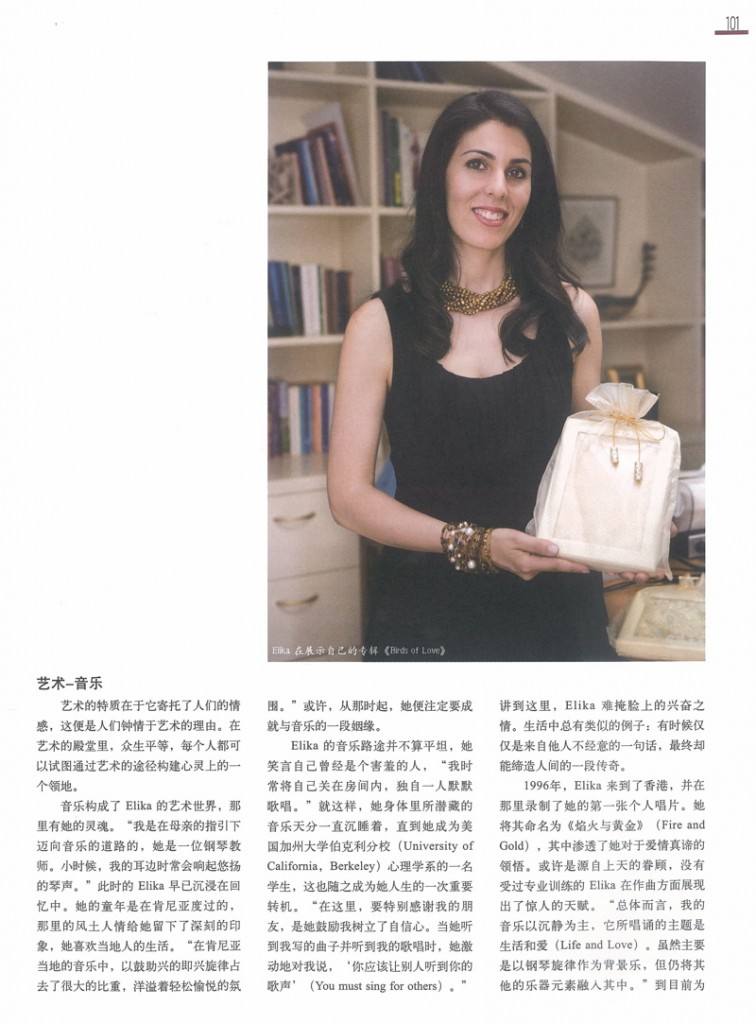 Art – Music
The reason why people love art is that people express their emotions through arts. In the palace of arts, everyone is equal, everyone can have a piece of land in their soul through arts.
Music comprises Elika’s art world where her soul resides. “My mother is a piano teacher and through her I was guided to the path of music. When I was a child, I could always hear beautiful music.” By then music was already embedded in her memory. She spent her childhood in Kenya which left a deep impression on her with its culture and customs. “In the local music scene people are encouraged to do spontaneous performances in which everyone is encircled in a joyous atmosphere.” It seems since then she is destined to have a bond with music.
Elika didn’t have a smooth musical path.  She was telling us she was very shy. “I often locked myself in my room and sang to myself.” Just like this, the musical talent has always been hidden in her until she became a student of psychology at the University of California, Berkeley.  This was a crucial turning point in her life. “Here, I’d like to thank my friend who encouraged me and helped me build my self-confidence. Then she spoke of similar cases: sometimes just a random sentence from someone could lead to something happening.
In 1996, Elika came to Hong Kong and released her first album Melodies of the Nightingale where she expressed her understanding of true love. Maybe it is a gift from God, as she never received any professional music training. Elika showed amazing talent. “In general, my music is mainly for meditation, the theme is life and love. Though mainly accompanied by the piano, other musical instrumental elements are involved as well.”  Elika has currently released four albums. They are in the genre of new age, classical and pop. She firmly believes that music production comes from inspiration. She says music is the ladder to the soul. “I think what music brings to me the most is moral education. It makes me more patient, more friendly, and more forgiving to the people around me.” 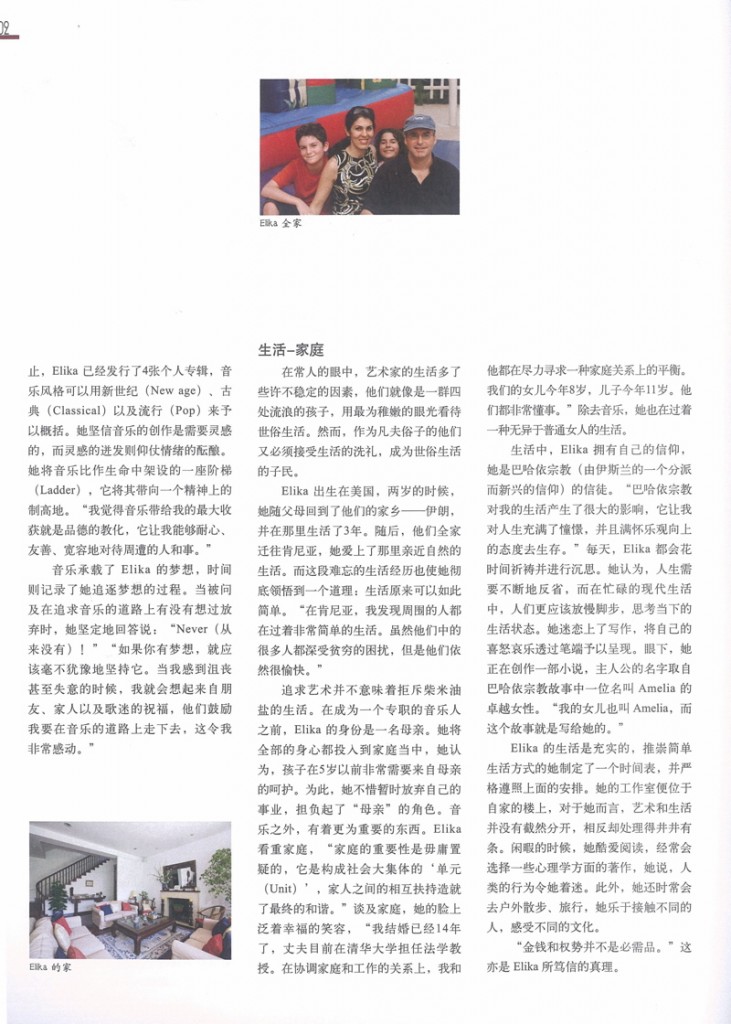 Music enabled Elika to realize her dream, and time witnessed how she made that dream come true. When I asked her if she ever wanted to give up her dream while she was trying to make it happen, she replied with such assertiveness “Never! If you have a dream, you should strive to make it happen with perseverance. When I feel sad or lost, I will think of the blessings my friends, my family and my fans send me. They encouraged me to pursue my music dream. This touches me very much!”
In most peoples’ eyes, there are many unstable elements in an artist’s life. They are thought of as just like wandering children who have an immature attitude towards life; that as human beings they have to accept the reality of how to live a practical life.
Elika was born in America, but she moved with her parents to their hometown in Iran when she was two, and lived there for three years. Then they moved to Kenya where she fell in love with the lifestyle of being close to nature. She learned that life can be so simple when she lived there. “In Kenya, I noticed that everyone around me lived such a simple life. Though most of them suffer from poverty, they are still very happy.”
Pursuing a life of art doesn’t mean you don’t live in a material existence. Elika was simply a mom before she became a professional musician, she put her whole heart in her family. She thinks it is very important that children under five have to be taken care of by their mother. Thus, she paused her career and played the role of a mother. Elika thinks family is very important because it is the basic unit of society. The harmony in an individual’s home contributes to the harmonious society. When we talked about family, her face glowed with a happy smile “I’ve been married for 14 years. My husband is a law professor at Tsinghua University. My husband and I both seek a balance between work and family. Our daughter is 8 and our son is 11. They both are very mature.” Besides music, Elika lives a normal life just like every other woman would live.
Elika’s religion is Baha’i. “Baha’i Faith has greatly influenced my life. It makes me  embrace life with a positive attitude.”. Elika prays and meditates everyday. She thinks life needs constant reflection. People should slow down their modern busy life and ponder the way they live. She has fallen in love with writing through which she expresses herself fully. Now she is writing a children’s book. The main character in her novel is called Amelia – a name found in the history from the Baha’i Faith. “Amelia is also my daughter’s name, and the story was written for her.”
Elika lives a full life. She enjoys a simple lifestyle and has made herself a time-table which she sticks to strictly. Her work studio is in her own house. For her, life and work is not clearly separated but she takes good care of everything. In her spare time she reads books in the field of psychology. She also takes walks, and travels. She enjoys meeting people from different cultures and hopes to understand their culture better.
“Money and power are not the necessities of life.” This is what she believes in.
Hometown
The word hometown always gives us an impression of stability. It is not only a place, but it also is the home of the soul. Therefore, one’s hometown can be everyone’s hometown too.
“China has been my hometown in my heart,” says Elika. It is very easy to tell how much Elika loves China. She believes that she was guided to this wonderful land by destiny. “China is very different from other countries where I lived. My children were born here, and my inspiration comes from this rich land,” says Elika.
Elika has lived in China for 11 years. While she is dedicating herself in this land, her soul is enjoying the Eastern culture. She described her experience in China with excitement, and enjoys sharing it with others. “We moved here when our son was very small. I remember when we went to a restaurant to have meals, people at the restaurant would help us take care of him. I have never seen this in other cultures.” She deeply felt the friendliness here in China as it is a country of friendship. “This is a land that bears miracles. You will find anything could happen. As a musician, I find lots of my inspiration here. Inspiration comes from its culture, its customs, its people…”
While she was making her last album, Birds of love, she used Chinese silk as the material for the cover. She says that it is a fascinating process when collecting materials. And this creative process can only be realized/fulfilled in China. 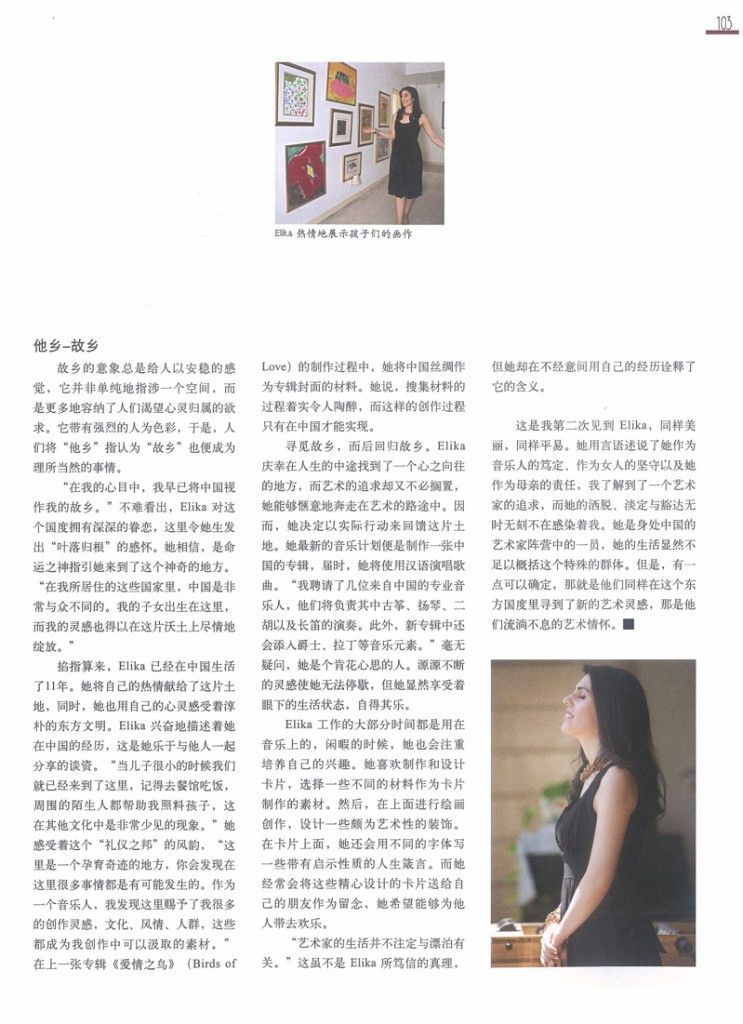 Elika feels very lucky that she found a place where her heart desires and at the same time a place where she can pursue her dream of art. Therefore, she decided to pay back this land through actions. In her latest album she plans to make a Chinese album, and she will sing in Chinese. “I’ve hired a few Chinese professional musicians to play in my album. They will play the zither, Santur, Erhu and flute. I will also add other music elements to it such as jazz, Latin, etc”. There is no question that she puts lots of efforts in her music. Unceasing inspiration keeps her going, but apparently she enjoys her life very much.
Most of her time is spent on music but she also spends time on her other interests. She likes to making and design cards. She selects different materials for the cards, then adds some artistic ornaments to them. She also puts some inspiring quotes in different fonts on the cards. She often sends her friends these elaborately designed cards hoping they would bring them joy.
“Life of art is not necessarily related to wandering around.” Though this is not what Elika believes in, but she tells us this through her experience.
This is my second time that I’ve seen Elika. As beautiful as she has always been, as down to the earth as she has always been, she conveyed her steadfastness in music as a musician, and her responsibilities as a woman. I learned the pursuit of an artist. Her elegance and openness has influenced me all the time. She is one of the artists in China, and her life obviously isn’t enough to describe the life of other artists. But one thing for sure is that they all are seeking for more artistic inspiration because this is part of their life!”
« Celebrating Valentines Day with a Song Happy Nawruz/Baha'i New Year! »

Dear Elika,
It was interesting to read the article.
I told you that I’ve recieved Birds of Love I placed it on our living room table,so we all get to read from it.
Sending you lot’s of love
Guy Fam.
Sigi Boaz Tomer Zohar and Maya

Thanks Jalehjoon. Glad you enjoyed the interview.
Dear Sigi, I’m so glad you received Birds of Love. I think of you often and hope you and your family are very well. Lots of love.