We’re just about to launch 3 new, original songs online! I’m thrilled to be able to share the songs with you as they are unique from all the previous music I have released.  The lyrics are all original and the style of the pieces are a fusion between Pop, World Music and New Age.  Several years ago my producer, Jarome, encouraged me to try out doing my own original songs as he felt we would be able to explore the diversity of my musical tastes and ability.  I wasn’t too enthusiastic at first because I felt comfortable with the music I was writing and felt a little daunted to try something new.  Jarome was patient with me and allowed me to digest the idea of creating something new for awhile.  He had planted a seed, for within a few months of vacillating back and forth, I felt ready to embark on the new challenge.
I must admit that the lyrics for the songs did not come too easily at first but with some time and patience and with Jarome’s assistance, we managed to come up with several songs that made me excited to try more…
We decided to release the songs in batches rather than waiting for the full album to be completed.  The first set is called ‘Edge of Forever’ after one of the songs and the other two songs are entitled ‘Missing You’ and ‘Listen’.  I have blogged a bit about the style here and will be blogging more about the songs later.  Here’s the art work for the cover: 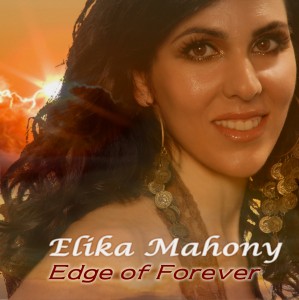 I would love to hear your feedback for these songs as they are completed and as we go forward with new songs.
You will be able to hear all the songs soon in the music section of my website.

« A Lingering Spirit Meditations of the Spirit, Chinese CD – Released! »

when will be able to hear a sampling?!

This is going to be unique!

Jalehjoon, we will put up a sample up soon for Edge of Forever. Can’t wait for you to hear it. Lots of love.

Congrats on your success Elika. Very happy for you.

The three songs you have given us are outstanding, each in its own way. The back up arrangements are outstanding. “Listening” particulary affected me. I want to listen again and again, this is the way for me to get
“into” the tune. Your voice is fluid and strong, beautiful. “Missing You” somehow connects me to “Khadijeh’s Lament” … and “The Edge of Forever”! Can’t wait to get them into my “system” Love, sooo good!

Thank you dear George and dear Jene for your loving comments.