A Photo Journal from a Special Visit

I recently returned from a most special visit to the Bahai World Centre for a 9 Day Pilgrimage with my family.  I thought instead of sharing all about the trip in one blog that I would share it in parts and with photos.  As the saying goes, ‘A picture is worth a 1000 words’ and I felt it would be best to share more photos and fewer words.
One of the highlights of our Pilgrimage was visiting the cell where Baha’u’llah (the Prophet-founder of the Baha’i Faith) was kept a prisoner upon His arrival to the prison-city of Akka in 1868 which was part of the Ottoman Empire in the 19th Century.  One felt the sadness and a glimmering of the suffering that was felt in that prison.  I was so moved to be there and to experience being in that spot and to look out the window of the cell to see what Baha’u’llah may have seen.  While we were there, I heard some chanting – a Muslim call to prayer – just outside the cell which took me back in time as I closed my eyes and imagined what it may have been like to be alive then.
I had the bounty of being in that cell all alone and was in awe as I was able to sing a couple of prayers.  What joy to be able to sing as I know how music and chanting was so well-loved by Baha’u’llah.  Tears streamed down my face as I felt so honored to be able to sing alone and from the depths of my heart.  My voice echoed in the room which created such a mystical feeling… It was for Him that I chanted.  As I turned to open the door of the cell to leave (I didn’t want to but had to catch up with the rest of the group), I found it was locked! I was locked in!! What irony I thought – to be locked in the very cell where Baha’u’llah was imprisoned for over 2 years! I panicked for a moment but then realized it was a gift as I could say some more prayers and meditate longer.  Just then, my husband magically opened the door and let me out.  I think I can say that was one of the most precious experiences of the whole trip. 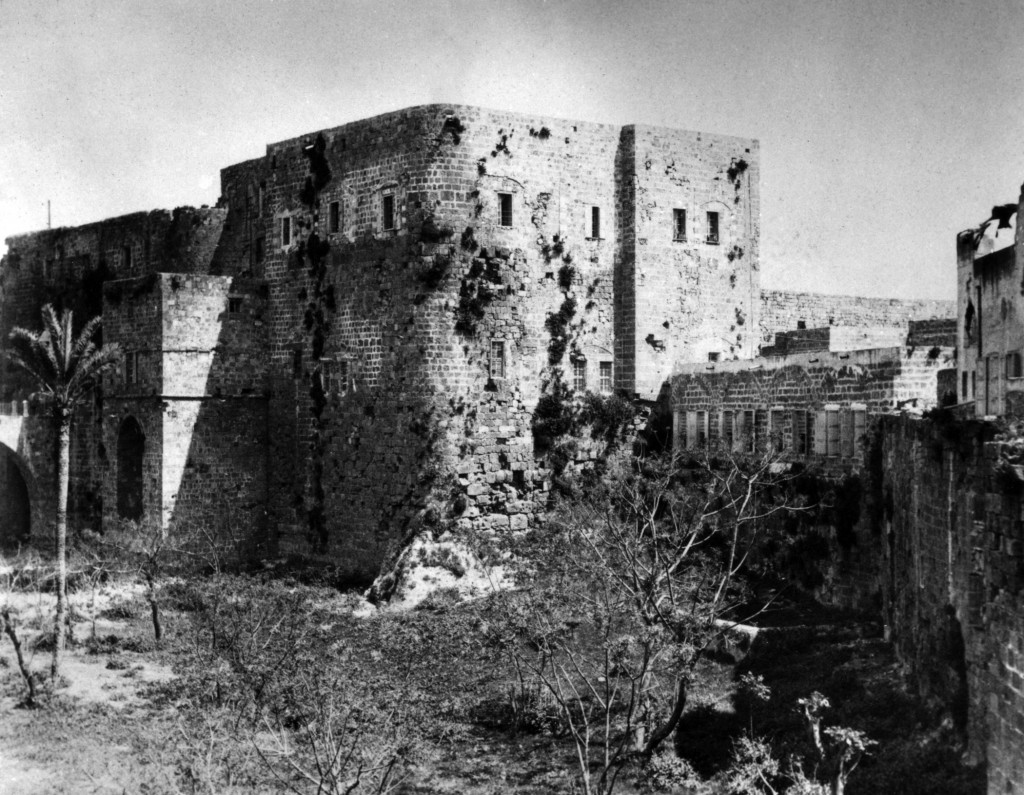 The two windows farthest right on the second floor show the room that Bahá’u’lláh occupied in the prison. 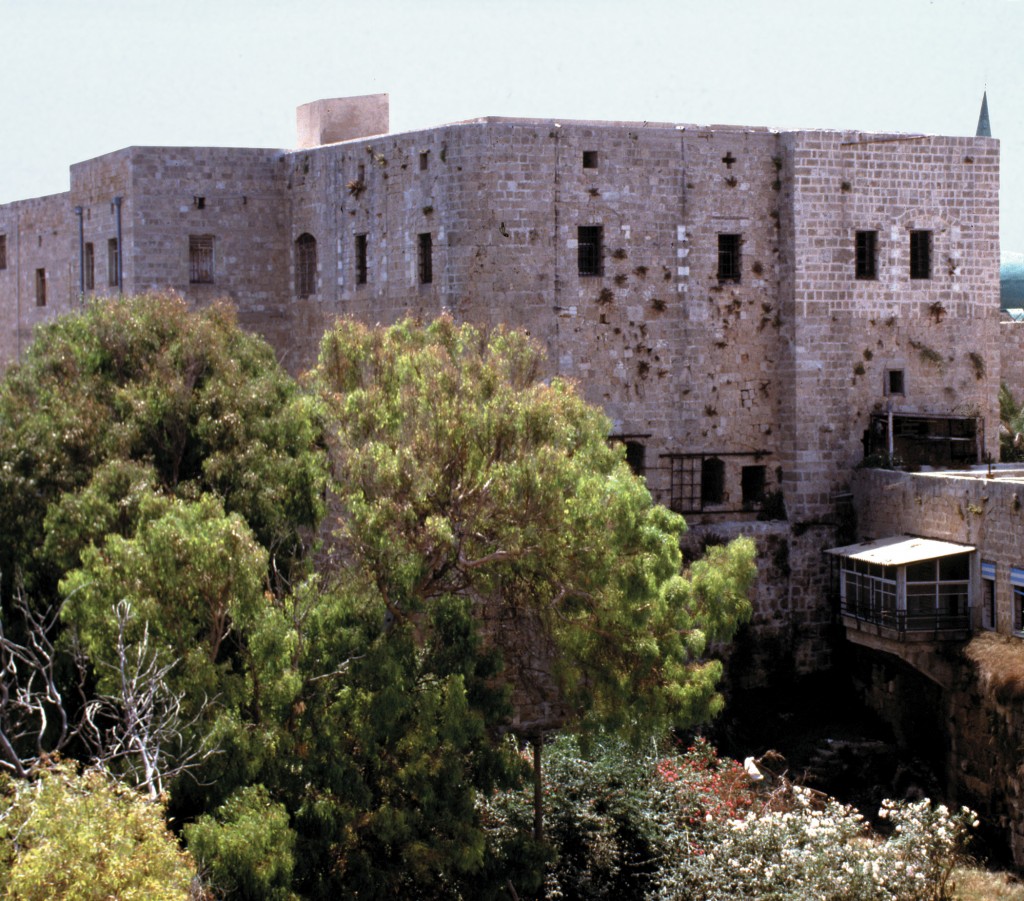 When He first arrived in ‘Akká (Acre), Bahá’u’lláh and His family were confined in this prison on the edge of the Mediterranean Sea. 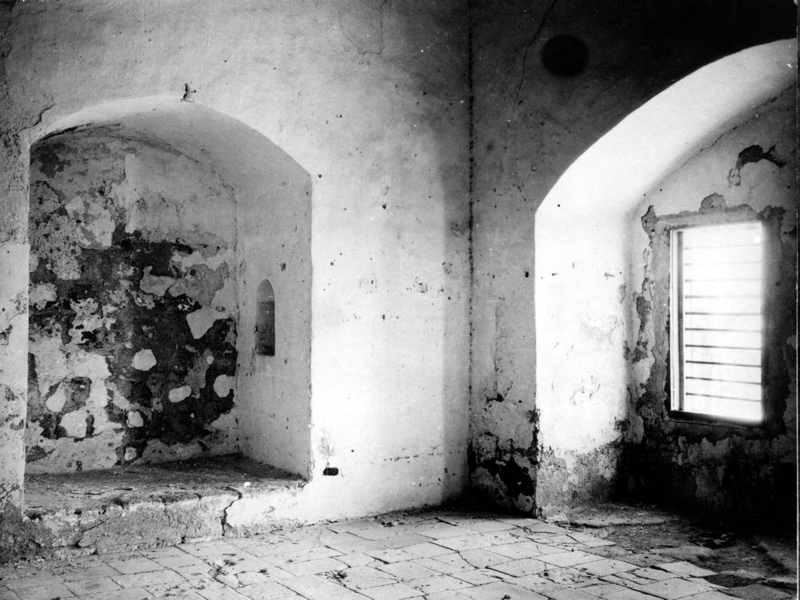 Historical photograph of the interior of the citadel of ‘Akká (Acre), Israel 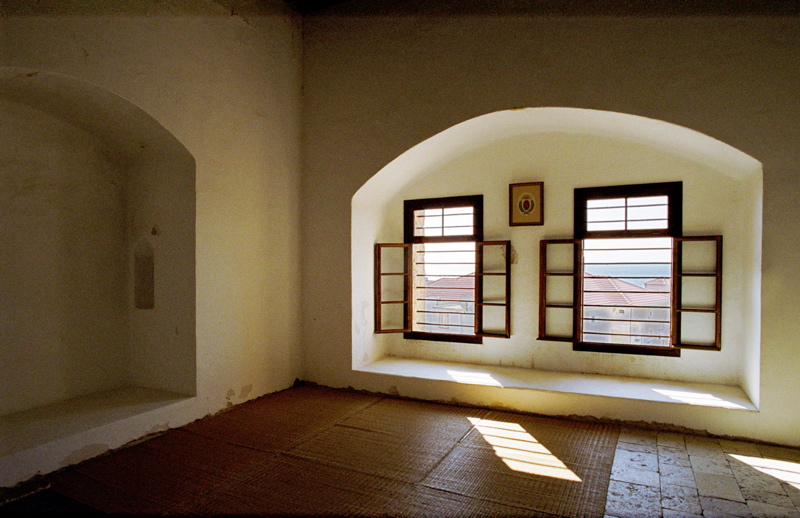 Inside the cell of Baha'u'llah after the completion of its restoration. (2004)

Oh dear Elika, my tears were falling down while reading you. How much love, what a spirituality I have felt from your heart. What a blessing to be able to sing! I can imagine how blessed was this experience for you, thank you for sharing this with us! Thanks a lot! Love. Ana

Thank you for sharing your experience in the cell of Baha’u’llah. Such a bounty to chant prayers there and in His Shrine.

Baha’u’llah also had the “most-great” sense of humor. Perhaps your being “locked in” was His way of saying He approved and wanted you to stay… but He kindly remanded you to the care of your dear husband. Was Tarry chuckling as he let you out? Sweet story!
I also thought it very ironic to note that the Jewish leaders who worked to establish the state of Israel early in the 20th century were also imprisoned in that very prison and so, whether they knew it or not, been partakers in the world’s treatment of the Messiah whom they awaited, and still await.

What a precious story. I look forward to hearing about more of your experiences from this very special visit.

Precious story, so special. On my first pilgrimage I got left behind at Bahji! The bus left without me, and like you at first I panicked, and then I thought “how wonderful” I am in the Holiest Spot on earth, NOTHING can hurt me! Some day I will tell you the story, it turned into something very special.

Elika…..such a moving story, related by one who has the heart and ability to
convey its significance ….. you are indeed an artist!! phil

Dearest Elika,
Thank you for sharing this special story…
Sally.

Dear Elika… what a gift. Thank you for your “voice” and spirit in sharing how much of a treasure He has given to us. I am richer now having met you and your family in the Holiest Places on earth!
Your friend,
ttbang

My precious one Elly
How sweet were the days in that Most Holy Spot on earth, and to share some of the memories with you makes it even more special.

Thank you my beautiful friends… It was indeed a bounty to be in that sacred spot and to be able to experience such a gift.
Dear Jene – I look forward to hearing all about your experience of being left behind in Bahji. 🙂