A couple of nights ago, we were invited for dinner by the State Administration of Foreign Expert Affairs which was held at the Great Hall of the People for senior foreign experts. I was lucky enough to be invited to accompany my husband who is a professor of law. It is an annual affair but this year marks the 60th anniversary of the founding of the People’s Republic of China so it was a particularly significant event. There were over 1700 people present and dinner was truly a feast. Preparing a banquet for that many people is no small feat! We were told it would be on the evening news as it seems that this annual event is actually quite well known by the Chinese people.  The large hall where we were seated was filled with music by a 50 person military band. I enjoyed the music that they played as it had a very festive and patriotic spirit to it.
The highlight of my evening was when the band played the Chinese National Anthem as we all stood at our tables. I felt very proud in that moment to be living in China and extremely honored to be invited to such a momentous occasion. I was quite moved as I stood there realizing what a special evening it was. After the National Anthem, there was a speech given by China’s State Council Vice-Premier, Li Keqiang, who shared that, “China opens its arms to the outside world, and welcomes more overseas experts to participate in China’s modernization and work hand in hand with the 1.3 billion Chinese people for the country’s national prosperity and strength, for the progress of human civilization, and for world peace and harmonious development.”  So beautifully stated!  I look forward to this week’s festivities and fireworks.  It truly was an honor to be invited to such a wonderful evening.

Just before the dinner, outside of our home. 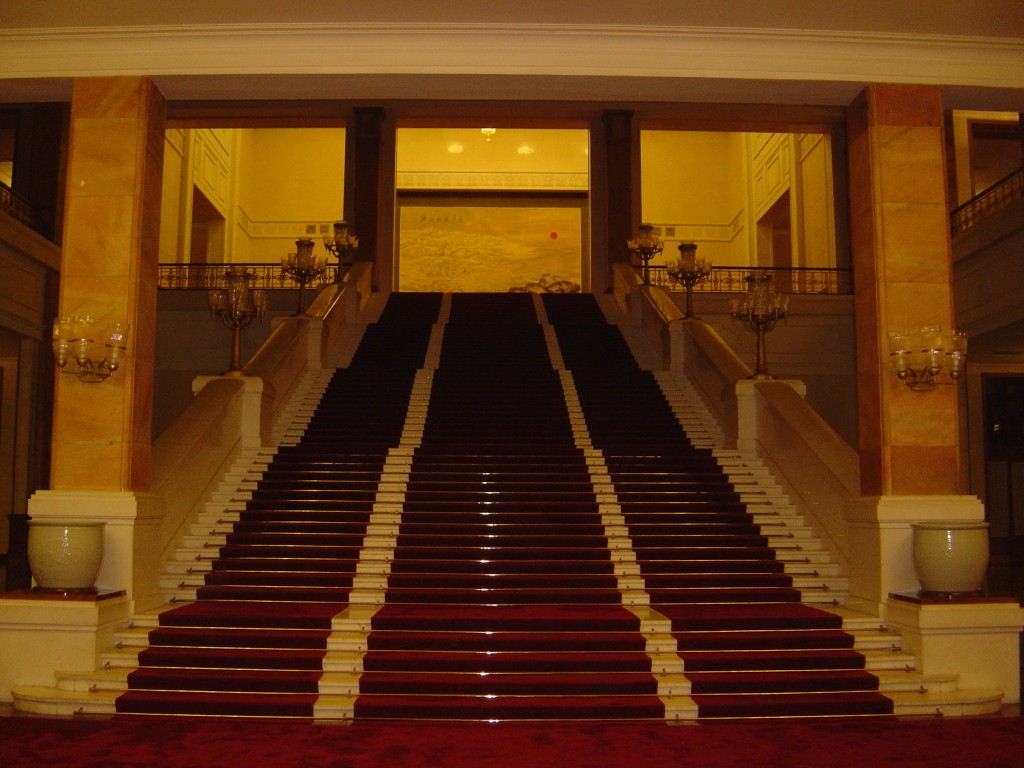 Inside the Great Hall of the People. Such a massive structure and the rooms were also huge.

« Music Collaboration Melodies of the Nightingale for the Family CD re-released! »

Thank you for sharing this dear Elika, truly what a blessing! I loved reading the Vice-Premiers words “…for the progress of human civilization, and for world peace and harmonious development.” Enjoy the festivities for us too 🙂 Much love!

Dear Elika,
It was so wonderful to see you and Tarry there. I agree with your sentiments completely! It was an amazing honour to be invited to such a momentous occasion. Everything was done with such precision and a wonderful feast was provided for all.
Love,
Karen

Dearest Elika,
Thank you for sharing this honourable occasion with us all.
It must have been an extraordinary experience!
Much Love,
Sally.

Hey Elika! What an unbelievable, possibly once-in-a-lifetime experience that must have been. Truly a priviledge. That staircase looks awesome. It’s too bad that the
attendees couldn’t have heard you sing. Did anyone of them know about your musi-
cal accomplishments? Phil, Viva and I had the honor of performing at Diaoyutai while were in Beijing. That was impressive also . I pray that all is well with you.
Right now Phil and I are trying to get to Shanghai for the World Expo 2010. Hope-
fully we’ll see you sometime next year…………God Bless!————Keith

Zaynabjoon – Yes the Vice-Premier’s speech was truly wonderful. We think of you and Aaron often…
Karen – What a great surprise to see you there too. It was truly a privilege to be there.
Sally – Lovely to hear from you. It was a very memorable experience.
Hi Keith – I would have loved to have heard you perform at Diaoyutai when you were in Beijing. We are all well thanks but missing you and Phil and your beautiful music. I didn’t have a chance to share my music at this function… it really wasn’t the occasion for it… but I did sing part of a Chinese song for the lady sitting next to me 😀

Hi Elly love
I was praying for you all that evening in the Most Holy Spot on earth! So happy you had this amazing chance to be there. I love your pic!
love you too…