Recently a new friend asked me how my path in music came about and was it always interested in music.

I began playing the piano from the age of five.  My mother was a piano teacher so I was always surrounded by music while growing up.  As a young child I enjoyed learning to play, but at around age twelve I had an overly strict teacher who made going to class a terror and a torture! I still remember walking into her class one week when she was playing a beautiful piano piece.  I asked her if I could learn it and she coldly replied that it was too difficult for me to play.  However, her discouragement had the effect of making me want to prove her wrong – so I found the notes for the piece and learned it.  At the time I simply wanted to show her that I could do it, but now in retrospect I see how it was a valuable learning experience which taught me that “any stumbling block can be turned into a stepping stone”.

In college, a close friend, Michele Brown, encouraged me to continue playing the piano and that’s when I began setting the Baha’i Writings to music.  We performed mostly for our friends and the community at UC Davis.  Later, after I transferred to UC Berkeley, I met another dear friend and talented musician, Fiona Doomun-Rouhani.  We performed together for a couple of years and many of our friends encouraged us to record a CD.  In 1996 the three of us collaborated and finally recorded ‘Melodies of the Nightingale’.

After my son was born in 1997, I started composing pieces for children, youth and family, and in 2001 “Melodies of the Nightingale for the family’ was released.

Since then I have continuously been working on new compositions and am ecstatic that ‘Fire and Gold’ was just released. Music is my passion and I feel so blessed that it has developed into a career.

What is your passion?

Thought of the Day:  “A wondrous melody is wings for the spirit and maketh the soul to tremble with joy.” Abdu’l-Baha

This is a photo in my producer’s studio in Vancouver listening to some recordings we made for ‘Fire and Gold‘. 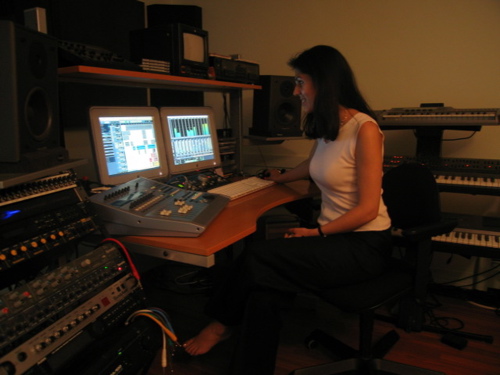 « A Heavenly Soul Fire and Gold available for purchase! »

Dear Elika,
What a lovely post. I shall visit it often!

Dear Elika,
Somehow, the link was broken in my last comment. So I repost it here. Love your blog!

Thanks Helen. I’m so glad you enjoy the blog. Good luck with your writing project.

Elika! Awesome website. Love it very much. This post made me think about the many people we meet and how they help us get to where we need to be. I had a similar experience in my teens, where some doors that closed were really blessings in disguise. But still, your teacher had a lot to learn. You should send her a link to your website, if you can find her. 🙂

Thanks Leylajoon for your kind words about the website. So glad you have enjoyed it! My piano teacher passed away about 15 years ago (she was quite old when I was taking piano lessons with her) but I’m sure she’s looking down and smiling 🙂

Hello Elika,
I am enjoying reading your blog, and quite love the tone and feel of your musings. Thank you for sharing your thoughts and experiences.
Also wanted to tell you how your first two CD’s have helped me. When we first moved to China our preparations were chaotic. We were so pressed for time we had only brought two CD’s with us out of our whole collection. They were Melodies of the Nightingale and Melodies of the Nightingale for the family. We played them constantly but they were especially soothing when I was feeling lonely or homesick as was often the case that first semester in a new country.
Now every time I listen to them now I am reminded of how they lifted my spirits during those challenging days for us.
Thank you, Briar